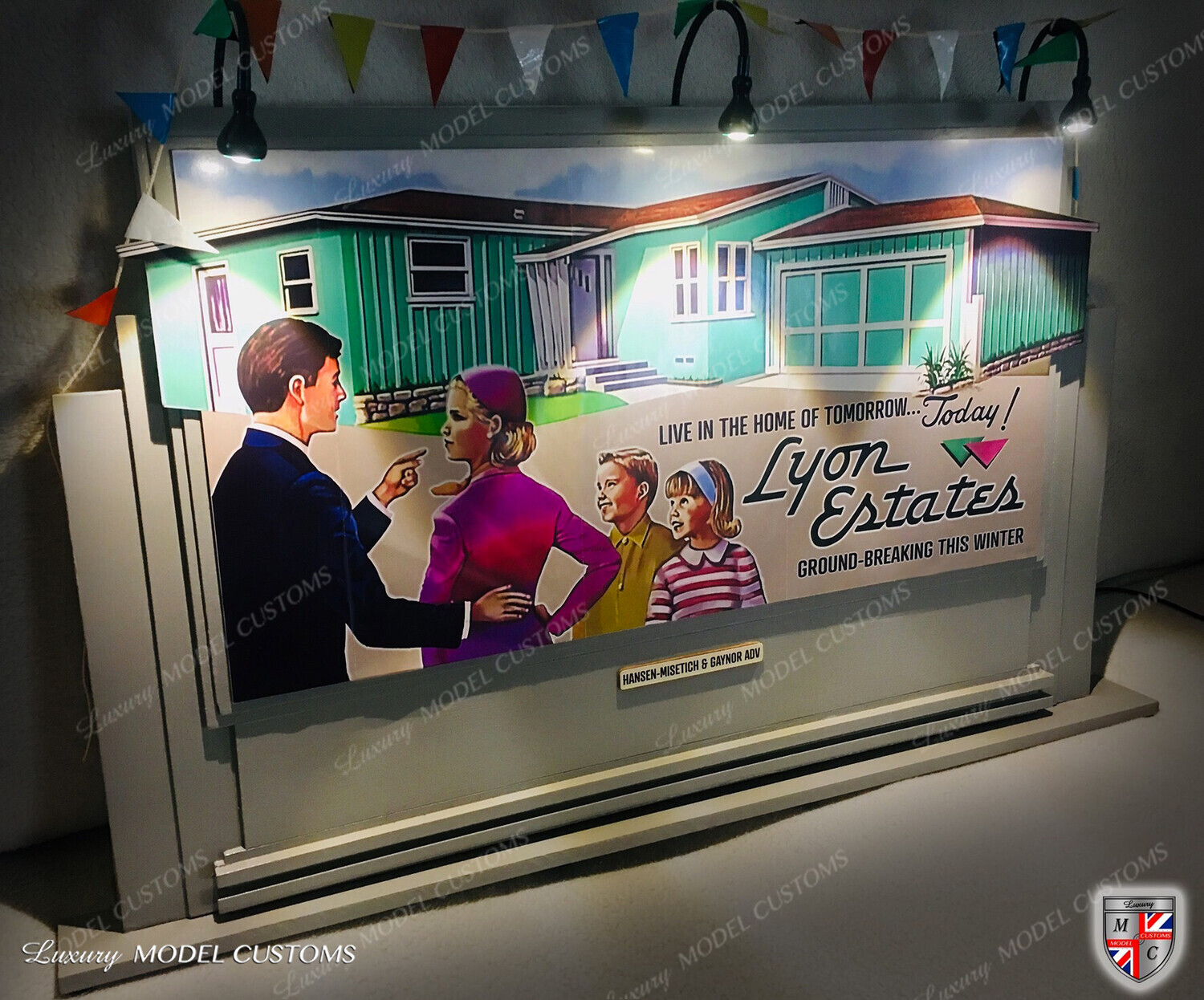 This listing is for the Pre-Built version of our 1955 Lyon Estates Billboard for the Eaglemoss Delorean 1:8 Scale. (Lighting upgrade is sold separately).

With the wealth of quality mods and props available for the Eaglemoss Delorean, nothing yet had been able to capture and accurately represent the scale of the model … until now. LMC now brings you the definitive prop to give your Back to the Future Delorean model scale and life with a diorama-esque miniature billboard of Lyon Estates. Upon standing this next to our Delorean model we couldn’t help but say “Now it looks complete."

Having spent weeks scrutinising every frame that the Lyon Estates billboard occupies in the movie we were able to extrapolate enough viewing angles in research for creating this product. The main poster section itself took weeks to completely recreate as there was no way to extrapolate it from the film without losing quality ... the photoshop file is 10gb! Our aim was to make this billboard as accurate a representation to the original as possible, whilst being a viable replica for display along side the Delorean model. For those with a keen eye you may had noted that there were in fact TWO distinctly different Lyon Estate billboards used in the film, varying in construction, size, and even colour … we therefore decided offer both versions for customers to choose. Where the original was made from plywood, we chose MDF for its rigidity and cleaner finishing. Where the original framework can be seen as made from pine timber, we chose Jelutong for having a smaller grain (perfect for scale modelling), light weight and less likely to bow whilst retaining a pine-like appearance. We chose to keep the 5-piece poster as 5-piece rather than a single image for authenticity.

“What is the difference between the BTTF1 and BTTF2/3 versions?” - So glad you asked! There had been four years between those films and during that time the original Lyon Estates billboard had been dismantled. When they made a new one there were noticeable changes. In the first film, the main poster had a beige floor with a turquoise house whereas in the later films it was a green floor and a cyan coloured house. Other less noticeable differences were in the trim bars along the bottom of the billboard itself. In the first film these bars were five short lengths of timber with gaps between them, whereas in the later films (and in our prototype) they were two long strips of timber which ran across the entire front bottom section of the billboard. Either version can be ordered from LMC. Whether or not this was an intentional change to represent an alternative timeline or just an error on the film’s part, we may never know, nevertheless both versions are up for grabs.

The entire billboard measures 710mm x 460mm x 100mm (max when Deluxe Lighting upgrade is added) making it almost 25% longer than the Delorean (as it would be to the real car), constructed in the same manner as the original right down to the structural supports, which can be seen briefly in Back to the Future 2 when Doc & Marty fly back to 1955.

For the Pre-Built versions, the timber frame has been treated with two coats of clear satin varnish to bring out the grain and preserve it against the elements, whilst retaining an almost “untreated timber” appearance. The rest of the billboard has had no less than 1 litre of paint from primer, to undercoat, to top coat, guaranteeing its life for a very long time. The poster itself had been printed on high quality vinyl then coated in two coats of clear nitrocellulose acrylic lacquer to protect against UV. We have also made sure to include eight felt feet on the bottom to prevent scratching your furniture.

The billboard you are currently seeing in the photos is a hand-sawn, hand painted and entirely hand-made prototype whereas your version will be laser cut for completely flawless accuracy. Each version of our billboard takes four to six weeks to make from scratch as all are made to order, and will arrive carefully packaged in the same manner that LMC has been known for.

The Luxury Model Customs 1955 Lyon Estates Billboard is available in the following options:-

All products are shipped at the lowest price available, with both tracking and insurance.

(N.B. Luxury Model Customs are not responsible for any customs and tax duties the buyer may incur by purchasing internationally).

Save this product for later

Luxury Model Customs offer bespoke, hand-made products made in England that turn your model into something both special and unique, far over and above that of your model's original manufacturer. Using only the highest quality materials and obsessive attention to detail, our products are the metaphorical icing on the cake. In short, our custom parts make your model what it should have been to begin with. Nothing flimsy, nothing die-cast, and if we can avoid it, nothing plastic. To date our mod kits are made using the finest quality metals and Nappa Leather.

Amazing customer service. The craftsmanship of the work is second to none. Cannot recommend these enough.

My BTTF Wallet is outstanding.  Packaging is top class as well.

110% I will be buying from these guys again.